A birds nest in your appliances vent will cause a build-up of debris inside the ductwork from the bird's nest to the back of your clothes dryer.

Dryer duct cleaning has an average cost $135 ** Contact The Lint King today to get Answers or Schedule an appiontment.

How Often Should My Dryer Vent Be Cleaned?

The best way to prevent the possibility of a dryer fire harming your family is an annual dryer vent inspection and cleaning by the professionals at The Lint King Dryer Safety Experts.

The Lint King is proud of its customer satisfaction record as demonstrated by the customer testimonials that we've received since 2005 from our local customers.

What our dryer vent clients say about us. 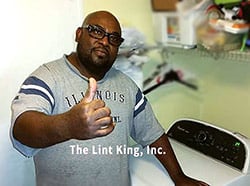 "You guys are fantastic! We just bought a new dryer and had no clue about the dryer vent needing to be cleaned.

"It was my first time and what a learning experience. I had no idea how much lint and hair was in my dryer vent. Thanks again for the cleaning.

Thank you for your hard work, effort, and honesty." - John

The Lint King is proud of our customer satisfaction. Read more. RAVE reviews.